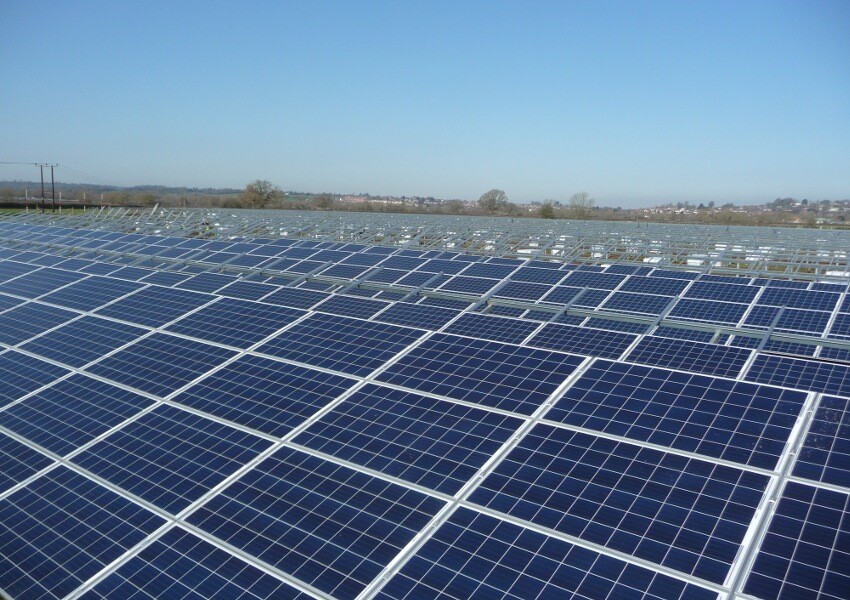 In the middle of January PFALZSOLAR started building two further solar parks with a total output of just under ten megawatts (MW) in the south of Great Britain. The solar parks “Derwen Farm” and “Sutor Farm” shall be completed at the end of march.
The “Derwyn Farm” solar park with a capacity of 4.7 MW is currently under construction near the coastal city of Cardiff. The region gets about the same amount of sunshine as Baden- Württemberg. In combination with the highly efficient modules produced by Solarworld and the inverters made by Huawei, the solar park will generate about five million kilowatt hours per year when it comes into operation. This is enough green energy for more than 1,000 households.
At the same time PFALZSOLAR constructed the solar park “Sutor Farm”, which is about 30 kilometres away as the crow flies on the other side of the Bristol Channel. When it is completed, the solar power plant with a capacity of 5MW will also generate about five million kilowatt hours of solar energy each year. Quality modules from REC and inverters made by Sungrow are used for the special design of the plant. The environmentally-friendly power generation has a minimal effect on nature. This means that on completion of construction, the land surrounding the solar modules will be replanted and will again be made available to grazing sheep. PFALZSOLAR finances the planning and construction of both major projects itself. It is only after commissioning that the company will sell the plants to investors. The solar power plants are planned to be feeding into the national grid as early as March, thus qualifying for ROC 1.3 funding.

PFALZSOLAR has an experienced partner on its side to implement the project in the form of the Greencells Group. The group based in Saarbruecken, Germany has already installed 83 solar parks worldwide with a capacity of over one gigawatt, 250 megawatts alone in Great Britain. Thomas Kercher, the CEO of PFALZSOLAR is very happy with the cooperation: “There is a tight schedule for building the solar parks which makes it even more important to have a reliable partner on location. The intensive exchange of experience between the PFALZSOLAR and Greencells teams helps to recognise the project specific challenges and to master them as well as possible.” For 2016 PFALZSOLAR is already developing a range of further projects in Great Britain and is looking forward to working with Greencells again in the future. “We at Greencells had very precise interfaces with the colleagues from PFALZSOLAR, allowing us to continue meeting the challenges of new markets with a good cost structure in the future and to construct and operate competitive solar plants on a power plant scale,” said Andreas Hoffmann, the CEO of Greencells.