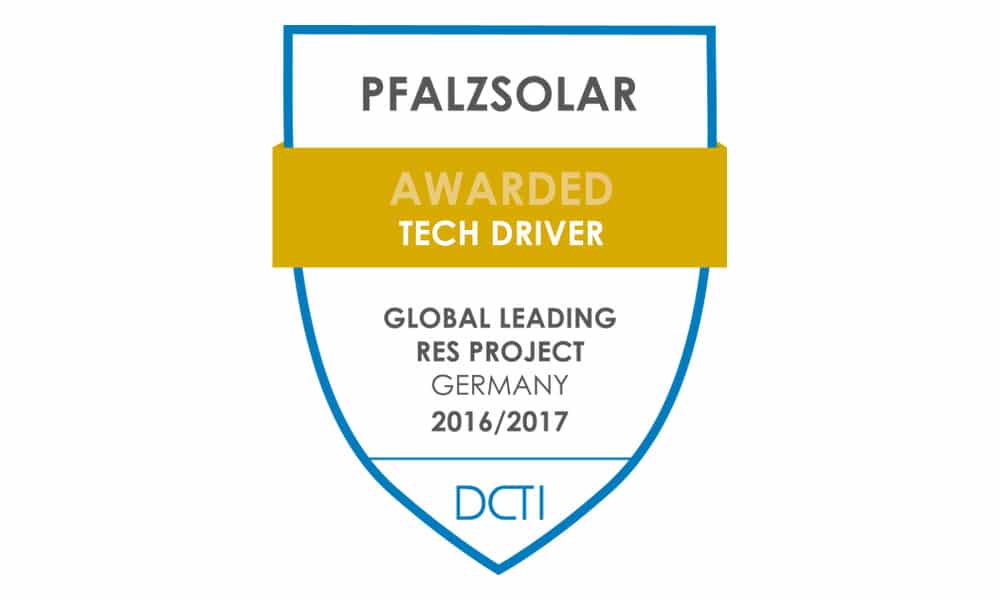 The German Clean Tech Institute (DCTI) certified the solar park Brandholz which was realized by PFALZSOLAR at the end of the last year, as a „Global Leading RES Project“. The DCTI has partnered with EuPD Research, the Joint Forces for Solar (JF4S) initiative and the International Battery & Energy Storage Alliance (IBESA) to certify the world’s most innovative RES projects and starts with a closer look at PV and EES projects. Outstanding photovoltaic and energy storage projects may be rewarded in five categories: First Mover, Tech Driver, Innovative Application, Unique Location und Largest Project. For 2016, the DCTI has chosen 46 projects out of more than 300 that have been recommended by experts or registered by the initiators and drivers of the projects. The solar park Brandholz has been awarded in the category Tech Driver (PV / EES project with the most innovative technological attributes).
In total, 18 projects have been certified in the Tech Driver category, including three German projects. Other successful projects were mainly realized in the US and in the UK but also in Australia, South-Korea, Italy, China and the Netherlands. In addition to PFALZSOLAR, the DCTI awarded projects from the American electric-car manufacturer Tesla, the Chinese inverter manufacturer Sungrow, the German energy Supplier EON and the American electric companies Duke Energy and Souther California Edison.
“We’re really happy about the award”, says PFALZSOLAR CEO Thomas Kercher. “The solar park Brandholz is an outstanding project that proves how former landfill sites can be used for photovoltaic despite difficult conditions.” In the case of the solar park Brandholz a distance of 1.6 meters between the ground and the modules had to be kept. Compared to other landfill projects, this is an unusual exception. Therefore PFALZSOLAR used a special mounting system which protects the landfill surface and ensures the highest possible structural stability at the same time. “The seal Global Leading RES Project underlines what is quite important to us: maximum competence and expertise as well as highest quality on a national and international level.” says Thomas Kercher. The 100% subsidiary of the Pfalzwerke Group, a regional Germany Energy supplier, is becoming more and more international. After realizing several projects in the UK and founding a subsidiary in the US, PFALZSOLAR is now planning to act as an EPC contractor in the Netherlands.