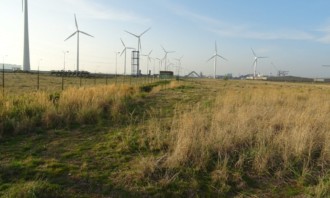 Nuclear power and photovoltaics? When it comes to energy transition, the Netherlands are once again ahead and proof what it means to think out of the box: EPZ, the operator of the Borssele nuclear power plant in the province of Zeeland already invested in wind power and is now also relying on solar energy. At the end of last year, Elektriciteits-Productiemaatschappij Zuid-Nederland initiated a tender for the construction and operation of the 21.5 megawatt solar park on the site of the nuclear power plant. PFALZSOLAR was able to assert itself successfully against numerous international competitors and plans to start with the construction of this large-scale project in the third quarter of this year.
“To build a solar park in the immediate neighborhood of a nuclear power plant was not absurd for us, but logical and reasonable,” says Max Huber, Head of Project Development at PFALZSOLAR. “Otherwise, the areas would remain unused, which would be a loss from both an economic and an ecological point of view. The electricity produced in the Borssele solar park is remunerated according to the Dutch SDE+ subsidy system over a period of 15 years. Every year, the solar power plant produces more than 21 million kilowatt hours of environmentally friendly solar power – theoretically enough energy to supply more than 7,000 average households. Jürgen Hampel, who supervised the tendering process for the Borssele project at PFALZSOLAR, emphasizes: “We are looking forward to working with EPZ and to jointly shaping another milestone in the Dutch energy system transformation”.

“EPZ is the largest electricity producer in the province of Zeeland and already started investing in renewable energy in 2003. With this solar park, we are not only expanding our generation capacity, but are also investing in regional climate protection and the energy transition. We are looking forward to the start of the project and are confident that we have found a strong partner in PFALZSOLAR.” Says Jos Weststrate, who is responsible for the project management of this project at EPZ.

The solar park at the Borssele nuclear power plant is another multi-megawatt project for PFALZSOLAR in the Netherlands this year. In March, the company already started construction work on the Almere solar park in the province of Flevoland, which is, with a total capacity of 34 megawatts, one of the largest photovoltaic power plants in the country. PFALZSOLAR also plans to implement further large roof and open space projects in the Netherlands and Luxembourg by the end of 2019.

PFALZSOLAR is official sponsor of “pv magazine live” during Intersolar Europe 2019: Would you like to meet us at Intersolar from May 15-17 in Munich? Then we are looking forward to your appointment request: www.welove.solar