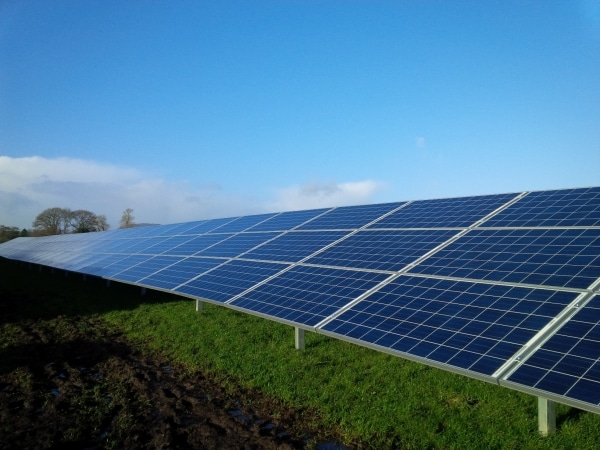 Pfalzsolar has made a successful start to the New Year with two large projects in Germany and Great Britain. The extensive project pipeline for ground-mounted solar power plants and the ever increasing demand from private customers allow an optimistic view of the future.
After the successful entry into the British solar market last year, Pfalzsolar is tackling a second major project in the United Kingdom. The solar park “Tiln Farm” with an output of 9.8 megawatts is currently being built in Retford, Nottinghamshire – circa 35 km east of Sheffield. Once in operation it will produce about 9.5 million kilowatt hours of CO2 neutral solar energy each year – equivalent to the consumption of over 2,000 households. The solar park is due to be up and running and feeding into the grid as early as March. The plan is to sell the whole project to an investor. Pfalzsolar as a service provider will, however, ensure the smooth running of the plant on a long-term basis. Before the building work for the two projects “Tiln Farm” and “Hayford Farm” is even completed, Pfalzsolar is tackling the next solar projects in Great Britain with its British partner Green Power Investment Holdings Ltd. “We have a lot in our project pipeline,” explains Thomas Kercher – Pfalzsolar’s Managing Director. “Great Britain, along with the core business in Germany, has become a solid second pillar for Pfalzsolar.”
The second major project that Pfalzsolar started at the turn of the year illustrates that the German solar market still offers chances to implement ground-mounted solar power plants profitably even after the 2014 EEG amendment. The solar park Woldegk with a capacity of 9.0 megawatts is currently under construction in a clay surface mine area in Mecklenburg-Western Pomerania. After commissioning, the plant will feed around 9.2 million kilowatt hours of environmentally friendly electricity into the grid annually. For 2015, Pfalzsolar has a whole range of further projects in the pipeline – including some in Saxony and Mecklenburg-Western Pomerania. “We still have a lot of plans on the German ground-mounted solar market as well and we are constantly looking for new suitable areas. The interest in turnkey plants in Germany is unbroken,” stresses Kercher. Pfalzsolar provides purchasers with long-term service and maintenance contracts for the solar parks it builds. This means that Pfalzsolar’s O&M business grows with each solar park that is built.
Kercher is also satisfied with the private customer business. “After entering the market in the first half of 2014, we are already an established player in the regional market and have managed to exceed our stated goals. We have exacting quality standards for components and service. We want our customers to be happy with our photovoltaic system for a long time.” Homeowners’ interest in generating their own electricity continues to rise. Developments in storage technology have made it possible to generate a substantial amount of one’s own electricity by installing a photovoltaic system on the roof. The surplus electricity feeds into the public grid – for example that of Pfalzwerke Netz AG – and is paid for at a fixed rate for over 20 years. Homeowners can thus easily calculate when a photovoltaic system will start paying for itself and consequently have greater certainty in planning.
Kercher expects 2015 to bring further positive developments in business. He says: “Entering the private customer market and developing turnkey activities gives Pfalzsolar a broad spectrum. We anticipate good development opportunities in all business areas and are sure that we will continue to grow in 2015.”