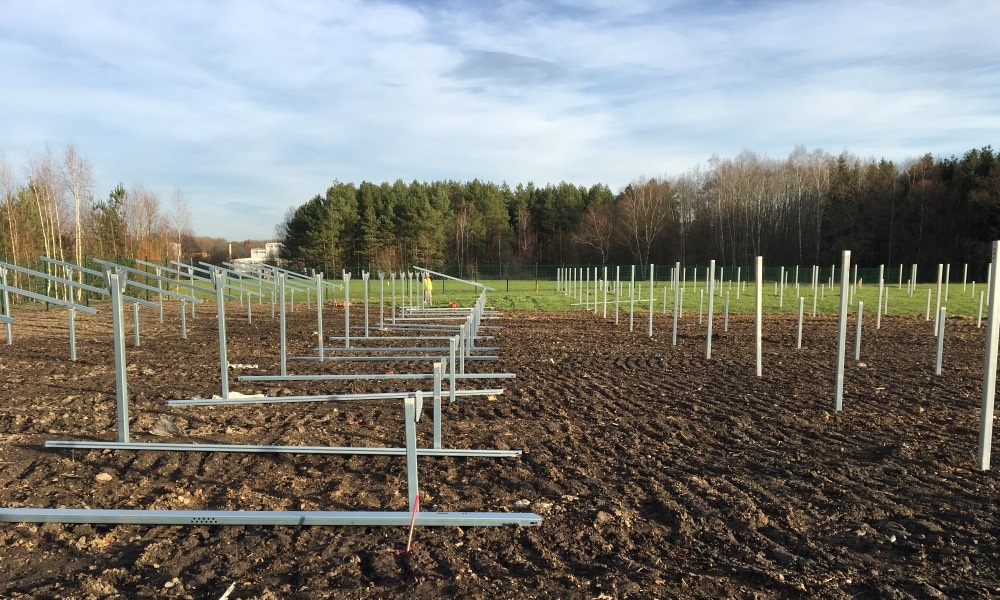 Before christmas, PFALZSOLAR completes its last solar farm under the German Renewable Energy (EEG) 2014 regime. The company currently installs a ground-mounted PV power plant with a capacity of 2.9 Megwatts in Klausa (Thuringia). For PFALZSOLAR it is the last project that receives the EEG feed-in-tariff which is 8.91 Eurocents per kilowatt-hour. With effect from 1 January 2017 all PV ground-mounted or rooftop installations larger than 750 kW must enter into the German competitive bidding procedure.
In this month, PFALZSOLAR already completed the construction of two further solar farms under the EEG 2014 regime: On former landfill sites in Brandholz (Hesse) and in Ellerstadt (Rhineland-Palatinate), two PV power plants with a total capacity of 2.9 MW have been constructed within a few weeks. In addition, the company is currently installing a rooftop system with 1.6 MW near Karlsruhe (Baden-Württemberg). Realizing another project with a capacity of 2.9 MW at the same time has been equally challenging and self-evident: “It would have meant the end for this project if we weren’t able to act immediately.” Says PFALZSOLAR CEO Thomas Kercher and praises the strong commitment of all involved local authorities. He also points out the great collaboration with the land owner, the German Heim Group.
Kercher: “We’re quite happy, that the solar farm in Klausa will be completed before Christmas. At the same time we’re wondering how the German PV sector will develop without the EEG 2014 regime.” The PFALZSOLAR CEO considers the PV auctions as a clear risk for the further expansion of photovoltaics in Germany. At the beginning of December, PFALZSOLAR connected its first project that successfully entered into the competitive bidding procedure to the grid (solar park Schiersfeld, Rhineland-Palatinate 7.7 MW). Of course, the company plans to enter future PV auctions – but they presume, that the percentage of effectively realized projects in relation to all successful bids will be fairly low.
As a consequence of the increasingly difficult environment for large scale projects in Germany, PFALZSOLAR expands its business to further foreign markets. After the company realized about 50 MW of PV projects in Great Britain in the last two years and founded a subsidiary in the USA, they’re now also active as an EPC for large rooftop installations in the Netherlands.