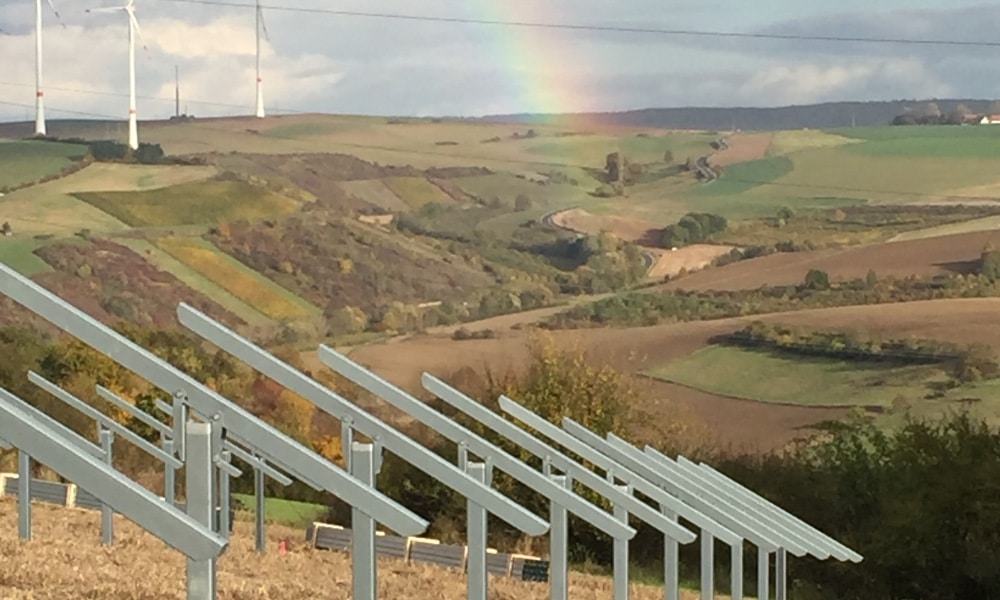 At the beginning of December, PFALZSOLAR will complete the construction and grid connection of another large scale PV project. The solar park “Auf dem Hackenberg” in Schiersfeld, Rhineland-Palatinate, has a capacity of 7.7 MW and is the first project which the company realizes within the German competitive bidding procedure for ground-mounted PV installations. The power plant is built on a farmland in a less-favoured area. The German “Bundesnetzagentur” (federal network agency) can only accept up to ten bids for such an area.
In the course of the fourth German tendering phase, PFALZSOLAR was – for the first time – one of the 21 successful bidders. The achieved feed-in-tariff for the solar park is slightly above the average amount of the accepted bids, which is 7.41 Eurocents per kilowatt-hour. According to the “background paper” of the Bundesnetzagentur a total number of 108 bidders have submitted a bid with an overall volume of 540 MW. Thus, the maximum volume that could have been accepted (125 MW) was oversubscribed four times.
“The competitive bidding procedure for ground-mounted PV installations is the subject of a controversial debate in the Germany PV sector” says PFALZSOLAR CEO Thomas Kercher. “And there’s quite a good reason for that: Receiving an award does not necessarily mean that the project is going to be realized.” Kercher criticises in particular that the procedure allows speculative bids and even unrealistic low prices. “What we believe is that ground-mounted PV installations contribute significantly to the energy transition in Germany. That’s why we’ll participate in future auctions, too. But we’ll certainly submit realistic bids – as we already did in the past.” Underlines Kercher.
Actually, the project should have been built already six years ago. At that time, a change in the German Renewable Energy forced the involved parties to stop. But now, things are developing quickly: the solar park “Auf dem Hackenberg” shall start feeding electricity into the grid at the first of December. Up to this date, the team hast to install round about 30,000 solar modules which will produce annually 8.5 kilowatt-hours of solar power. Theoretically, the power plant delivers enough electricity to provide not only the 230 inhabitants of the community “Schiersfeld” with energy but also 1,900 additional German households. “In the course of the fourth German PV auction only two projects in Rhineland-Palatinate have been awarded. It a great pleasure for us to realize a project of that size in our home region,” says Kercher and praised explicitly the very good collaboration with the local authorities.