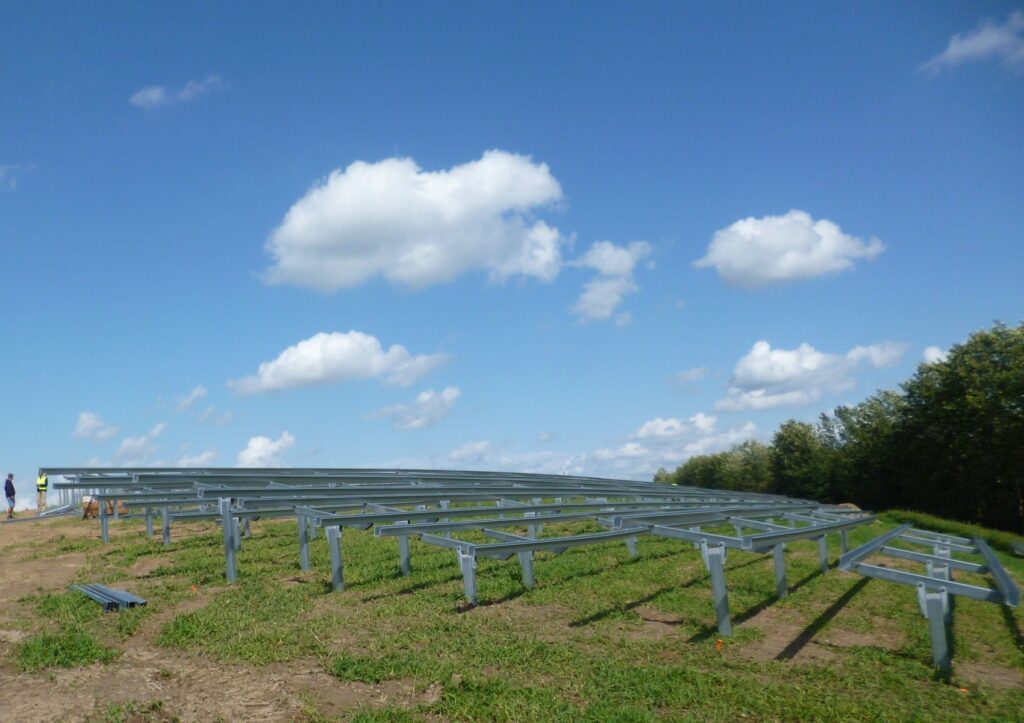 Recently, the Pfalzsolar GmbH started the construction of two new solar power plants in Mecklenburg-Vorpommern and Saxony-Anhalt, Germany. The company aims to take both ground-mounted power plants into operation in accordance with the German renewable energy law until the end of august.
Since a few days there’s a hive of activity on the disused landfill site „Heinrichshöh“ in the area of the Mecklenburgische Seenplatte: the Pfalzsolar GmbH, a subsidiary of the Pfalzwerke AG, is currently building a new solar power plant on this site. Until the end of august, more than 6,600 solar modules and round about 70 inverters have to be installed. Therefore, the installation teams are working quite hard. The selection of the mounting system has been a special challenge for the experienced team. To avoid any damage of the landfill body, Pfalzsolar chose a system with a very low driving depth. With an installed capacity of 1.7 Megawatt, the new solar power plant „Heinrichshöh“ produces nearly 1.7 million kilowatt-hours of environmentally friendly energy each year. In purely mathematical terms, this is enough energy to make one thousand electric cars drive for 12,000 kilometers.
At the same time, in Nessa, a district of Teuchern (Saxony-Anhalt), another large scale project is under construction. To ensure the commissioning until the end of this month, the installation teams a working with full speed, too. The project is realized in the context of a further cooperation with Bürgerservice Trier. With an overall capacity of 1.06 Megawatt, the ground mounted solar power plant „Nessa“ annually feeds round about 1.1 million kilowatt-hours in the electricity grid. This is theoretically enough energy to provide nearly one third of the people living in Nessa with electricity.
The feed-in-tariff for both power plants amounts to approximately nine cents per kilowatt-hour. “Even though the feed-in-tariffs are quite low, photovoltaic still pays off in Germany” says Thomas Kercher, CEO of Pfalzsoalar GmbH, with conviction. Apart from excellent conditions, such as for example a nearby grid connection point, especially know-how and experience are crucial for the economic success of a project. “We develop, construct and operate solar power plants successfully for more than ten years. But we are not going to rest here. With every new project we are getting a little better, aiming to get the most out of it – technically as well as economically.”