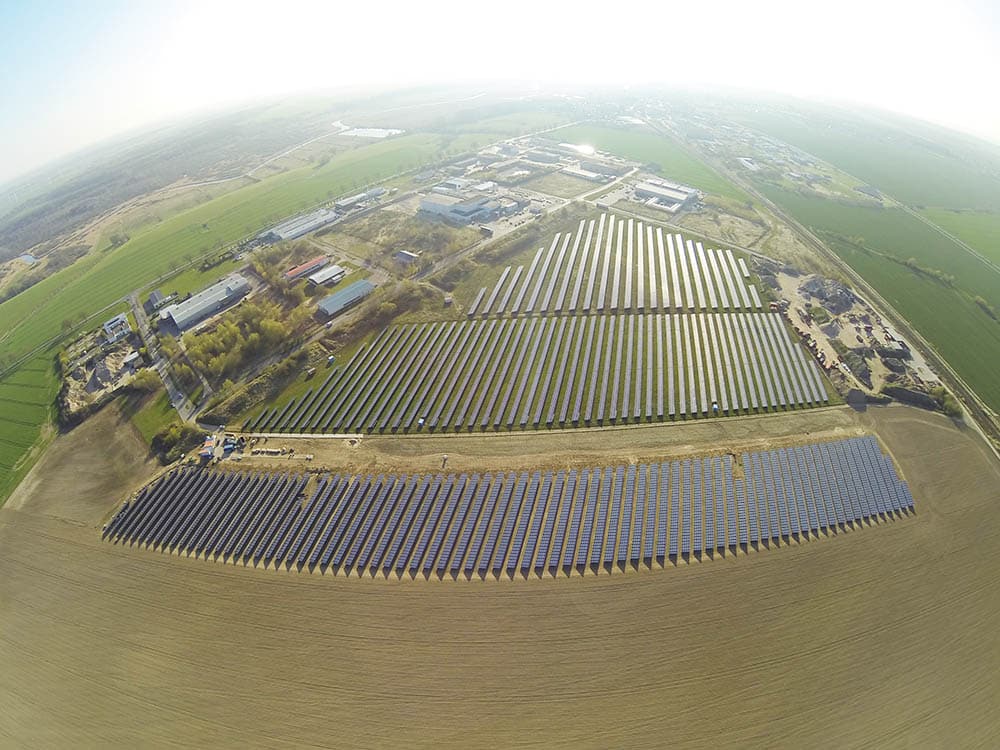 Within four months, Pfalzsolar GmbH, a 100% subsidiary of the Pfalzwerke Aktiengesellschaft, completed two solar parks in Mecklenburg-Western Pomerania. The solar parks “Woldegk” and “Ribnitz”, located near the Baltic Sea, will in the future produce about 12 million kilowatt hours of environmentally-friendly electricity.
The Woldegk solar park with a capacity of 9 megawatts was completed in the first quarter of 2015 and will in future produce about 9.2 million kilowatt hours of climate-neutral electricity per year; this equates to the average consumption of about 2,900 households. The site in a former clay-mining area coupled with unfavourable weather proved to be a major challenge for the assembly team. “After half a day’s rain we were knee-deep in mud,” is how Thomas Kercher – the CEO of Pfalzsolar described the construction phase. “It is thanks to the strong commitment of the entire team that the plant could be commissioned as planned despite the difficult circumstances.” The contract for the sale of the solar park was signed as early as April. A comprehensive service package was put together for the future owner – although Pfalzsolar will be responsible for the technical operation of the plant. Pfalzsolar also looked after the arrangement of the best solution for the long-term financing of the solar park. The Pfalzwerke will be responsible for the direct marketing of the generated electricity.
At the end of April, Pfalzsolar completed work on the Ribnitz solar park in the industrial estate of the municipality of Ahrenshagen-Daskow. The so-called amber town of Ribnitz-Damgarten is not far away, in the middle of the Fischland-Darß-Zingst region. The ground mounted plant with a capacity of 2.7 megawatts borders on the west to two other solar parks and on the east to five wind turbines. In the future, the Ribnitz solar park will contribute to environmentally-friendly electricity generation in the region with a further 2.7 million kilowatt hours. Thanks to the good soil conditions on site, the plant construction went like clockwork and the solar park could even be EEG-compliant commissioned a few days earlier than planned.
Further projects are currently in the implementation phase: in Thuringia Pfalzsolar will build in the transitional period within the scope of the existing renewable energy act. After that, the new subsidy system comes into effect, in which the subsidy rates for photovoltaic ground mounted plants will be determined by means of an invitation to tender. “The new funding process will be a learning curve for all project developers,” commented Kercher. He feels that Pfalzsolar is well-equipped for the competitive process. “We rely on our tried and tested business model, which includes not only planning and construction but also services concerning technical operation, financing and direct marketing. Our comprehensive service package offers our investors genuine added value and allows to increase our solar parks’ targeted margins.”