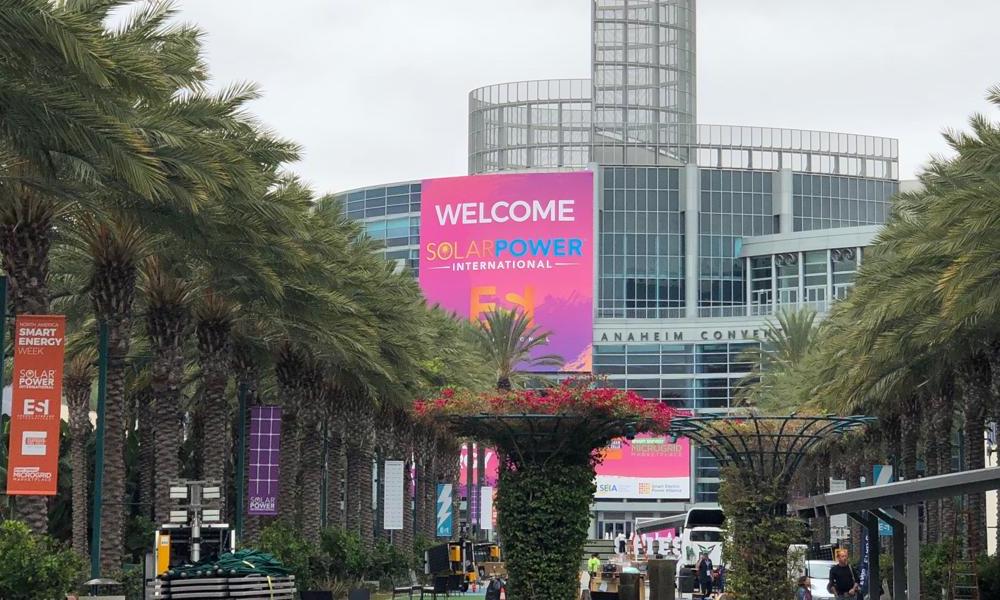 The SOLAR POWER INTERNATIONAL (SPI), the largest solar and storage trade fair in North America, started on Monday in Anaheim, California. This year, the organizers and 750+ exhibitors expect again more than 20,000 international solar, storage and smart energy professionals on a total of four days. The trade fair, which has been trend-setting for the American solar industry for over 10 years, will be accompanied by an extensive congress program with numerous panel discussions.
“In the first half of 2018, Solar accounted for 29% of all new electric generating capacity installed!” announced Abby Hopper, CEO of the Solar Energy Industries Association (SEIA) at the opening session in Anaheim on Monday evening, referring to recently published US market insights from SEIA. By the end of the second quarter, North America has reached a PV capacity of 58.3 gigawatts (GW) – theoretically enough solar energy to supply eleven million American households. SEIA assumes that the total PV capacity installed in the USA will more than double in the next five years and estimates that 14 gigawatts will be installed annually from 2023 onwards. (Source: seia.org)
An optimistic assessment, but above all a realistic one from PFALZSOLAR’s point of view. The German Project Developer and EPC contractor has already founded a subsidiary in the United States in 2016 in order to drive its project business forward. The company is currently focusing on expanding its 300 megawatt (MW) project pipeline in the US. For Lars Josten, CEO at PFALZSOLAR, this year’s SPI in Anaheim is exactly the right place for this: “For us, the US market will play an increasingly important role in the future. Over the past two years, we have successfully developed several large scale projects together with our local partners, gained important experience and expanded our network. The course has been set for further market development – and it is exactly for this reason that we are back at SPI this year. We are looking forward to new, exciting projects and the exchange of experiences with partners and colleagues from the industry”.
As a 100% subsidiary of Pfalzwerke Aktiengesellschaft, one of the leading energy suppliers in southwest Germany, PFALZSOLAR has a strong company group behind it, which has more than 100 years of know-how in the field of electricity and energy supply and has been actively involved in shaping the energy transition in Germany for many years. “Our background is not only a big plus for our partners in Germany and Europe, but also for our partners in the US. Being a part of the Pfalzwerke Group results in two major advantages: Economic stability and quality according to energy supplier standards. In a comparatively young industry that still has to face huge challenges, both of these factors count for a great deal”, says Lars Josten.