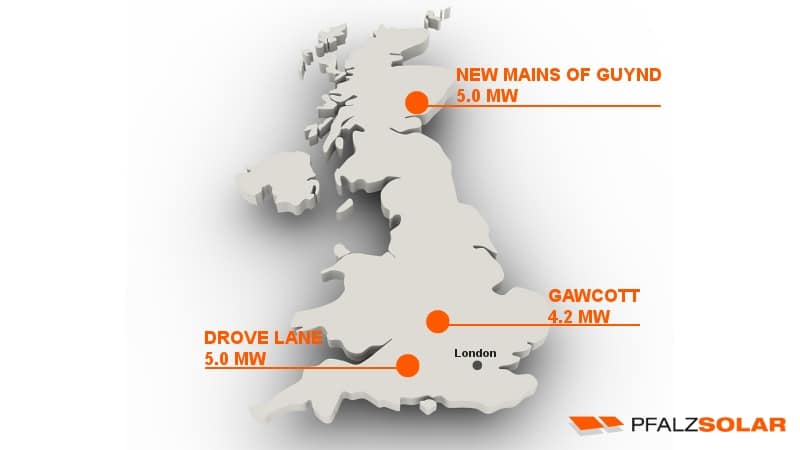 During this and the last week, PFALZSOLAR successfully connected three solar power plants with a total capacity of 14.2 Megawatt to the grid. The special thing about those new installations is that they’re all “Community Energy Projects”, which means that they’ll be refinanced by citizens and operated by municipal institutions. The “Brexit”, for which the majority of the British has voted last Friday, has no influence on those projects.
PFALZSOLAR installed the solar park “Gawcott” (4.2 MW) near Buckingham as an EPC contractor. The second power plant is located round about 700 kilometers away, in Guynd at the Scottish east cost: The solar park “New Mains of Guynd” (5.0 MW) has been constructed and connected to the grid within an extremely short period of only three and a half weeks. In the course of the project realisation, PFALZSOLAR worked again together with the Greencells Group which is based in Saarbrücken, Germany. The same applies for the project “Drove Lane” (5.0 MW) in Salisbury, in the south of England.
“The distance between the sites and the tight schedule have been challenging for our project teams. That`s why we’re really happy about the successful and punctual grid connection.” Says PFALZSOLAR CEO Thomas Kercher, who has waited for the Brexit referendum with great anticipation. “We were surprised by the result of the referendum. We didn’t expect that the British is really voting out.” But apart from this, the Brexit has no influence on the current activities of PFALZSOLAR in Great Britain. “We already considered the development of the British solar market as critical before the referendum.” The reasons for that are of course the drastic changes to the Renewables Obligation and Feed-in Tariff regime.

PICTURES OF THE SOLAR PARK “GAWCOTT”